Globular clusters are densely packed collections of ancient stars. Roughly spherical in shape, they contain hundreds of thousands, and sometimes millions, of stars.

There are about 150 known globular clusters in the Milky Way galaxy. Most are estimated to be at least 10 billion years old, and contain some of the oldest stars in the galaxy. The clusters likely formed very early, before the galaxy flattened into a spiral disc. 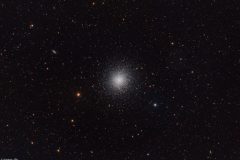 © 2023 FlapAstro All images are mine. Use or reproduction only with prior written permission.